These paired transducer units encompass an extreme wide range of omnidirectional to unidirectional function in one binaural set, providing a surround-sound effect, while working in tandem with our unique state-of-the-art instant recognition software. The result is exquisitely superior audio performance. Acuity and sensitivity is unparalleled in human audio technology.

Shielded cables (called auditory nerves) are hooked up to the main drive (brain) via the brain stem. The brain converts the signals to its own proprietary format and saves them in memory.

In field tests, musicians and music aficionados have identified unfamiliar songs performed by vocalists and musicians they had heard on prior occasions, after being exposed to only two measures of the song, or less.

Additional available features (Add-Ons)
* Replicating mode: playback of translated sound waves can be performed via voice, or manually (with hands/fingers) in tandem with musical instruments.
* Creative development mode: New combinations or arrangements can be inspired or influenced by stored data.

How do Ears work? 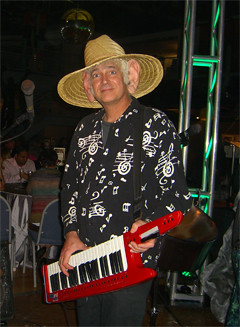 Sound waves (pressure changes) from the air enter the ear canal, and cause a sensitive inner diaphragm, the eardrum, to vibrate, along with tiny connected, moveable structures behind the eardrum called ossicles, which carry the changes of pressure to a flexible membrane called the oval window. Beyond that membrane is a complex and multi-functional structure, which includes the cochlea. The cochlea contains a fluid called endolymph and the basilar membrane, which is covered with delicate sensory cells. These hair like cells, called stereocilia, are stimulated by the vibrations, and emit electrical impulses that travel to the brain. These signals are interpreted and experienced as sound.

What are Ears worth to you?
How much would you pay for music equipment with these amazing attributes? If you are lucky enough to have a pair of these, how will you take care of them? Would you protect them from damage?

Preventing damage
Exposing your ears to high volume sound for too long of a duration, can fatigue the stereocilia cells, and if done repeatedly over the years, can eventually cause some of them to die off. Ear damage can also occur due to sudden extremely loud sound.

Loudness is measured in decibels (dB). Experts recommend keeping your exposure to continuous sound to no higher than 85 dB, to prevent ear damage. Some orchestras can be in this range, but not all of them. And it is far softer than most amplified bands. In addition, amplified bands can have sudden loud peaks due to feedback.

Ear damage caused by sound volume results in the inability to hear some frequencies, usually starting in the range of 4000 Hz. If the damaging exposure continues, additional frequencies go. It becomes more and more difficult to hear, and some of the appealing qualities of sounds are lost. If you know any musicians who dislike the sound of flutes or women’s voices, it may be due to loss of the ability to hear frequencies that make those higher sounds pleasing.

Protective Equipment for Ears
The impact of very high intensity sound waves over long periods can wear down and eventually destroy your stereocilia cells, and also damage your eardrums.

Earplugs are usually made of foam, wax, impregnated cotton, plastics or rubber. The best ones for listening to and performing music are designed to allow the sound to retain its full range of frequencies, but at a lower, safer volume. Some of these come in standard sizes and are fairly low priced (usually between $10. and $15. a pair), and some are custom-made to fit your ear canal exactly (usually $100. or more).

Here are some inexpensive earplugs that are designed to comfortably protect your ears from unsafe sound volumes, while allowing music and speech to be heard in its original range and quality. They come in two sizes, which (the company states) fit nearly 100% of all ear canals - standard (baby blue) which fit the majority of wearers, Etymotic Research ER20 ETYPlug Hearing Protection Earplugs, Standard Clear Stem with Blue Tip (Clear)

I borrowed the standard sized ones from a bandmember, and they did a good job of protecting my ears. I am ordering some.

If you would like to listen to or purchase music by Sabira Woolley, here is her Music Shop.


Photo of Ron Nathan using his Ears - by Sabira Woolley, used by permission.


You Should Also Read:
Vocalist Tips For Live Performances
Musicians - Get More Sleep
The Gift Of Musicianship

Band Promo Videos On A Budget

Sharing Musicianship with your Children

Vocalist Tips For Staying On Pitch